Welcome to earthweal’s eighth open link weekend! Link a poem of your fancy using the Mr. Linky Widget (include your location) and be sure to visit your fellow linkers’ contributions and comment. Open link weekend ends at midnight EST Sunday night to make room for the Monday’s weekly challenge.

The Feb. 24 challenge will be A CLOCKWORK GREEN. Lots of weird spinning these days in the Earth’s watchworks!

Take a breath and join the fray! 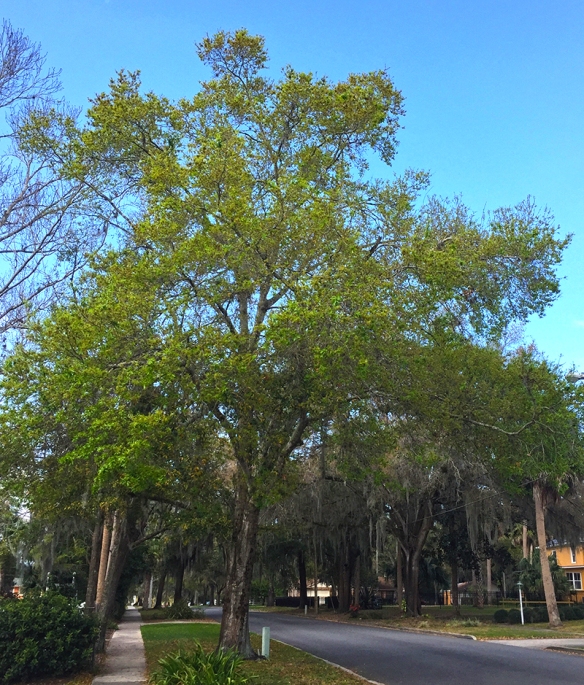 The oaks in my Florida town are now a-flush with vernal green.

This forum is dedicated to the work of finding adequate words to describe our changing Earth.

A geological epoch—the Holocene, civilization’s womb—is ending. Climate is changing rapidly, creating atmospheric conditions which haven’t been seen for 3 million years. It’s getting hotter, storms are growing wilder, oceans are rising.  This is rocking the lifeboat, causing a mass extinction of organic life.

One species is responsible, and its existence is equally imperiled, even though most of its present representatives don’t seem to know or care.

The tools we have developed to master our environment, developed over 300,000 years of homo sapiens development, are big enough now to alter geologic time. They have consequences too powerful for our simian brains to comprehend anywhere fast enough. Like some 21st Century sorcerer’s apprentice, humanity is chasing its iPhone through a frenzied clockwork of spinning hands and smoking gears.

I don’t know about you, but all this comes rather late in my story and it’s a lot to be hit with all at once.

Our self-obsessed human civilization, so unique and independent and separate from everything else (even other members its own tribe), itself is not doing much of a job absorbing the news. The two vast poles of response so far have been denial and despair, and neither does anything to address the problem.

In the week’s news, there’s little to suggest any perceptible change to the better, in the science or politics or culture. The global average temperature for January 2020 was the hottest for that month ever, suggesting that we’re in for another hot one this year. The northern tip of the Antarctic peninsula recorded its hottest temperature ever at 64.9 degrees F, part of a warming pattern in the area that caused widespread melting on nearby glaciers. Torrential rainfall is causing widespread flooding along the southern reaches of the Mississippi River, raising the specter of last spring’s devastating floods in the Midwest. Over in Africa, locusts are swarming in Kenya at unprecedented levels, magnified by heavy local rains (ramped by a hotter Indian Ocean) and rising air temperatures. As farmland is denuded by the insects, food security continues to become more threatened.

Meanwhile climate change denialism continues to grow its weird underground dodo with Republicans in Congress proposing funding for technology which would reduce emissions while avoiding any decrease in fossil fuel consumption. This, at the same time  a recent Nature study reveals that oil and gas production is releasing far greater amounts of methane than previously thought. And of course the Trump administration is moving forward with a plan that would eliminate the requirement that oil companies install technology to detect and fix methane leaks from their facilities, a rollback which by the EPA’s own estimates would increase methane emissions by 370,000 tons through 2025.

And with the coronavirus continuing to spread, further feeding fears of a global pandemic, the cause is narrowing to pangolins, a scaly, ant-eating mammal which is being trafficked into extinction, imported to Chinese markets for medicine and food. Actually, bats are probably the source, and pangolins are acting as intermediate hosts while being ruthlessly harvested for human consumption. Last year in Hong Kong, authorities discovered a shipment of 14 tons of pangolin scales; about 36,000 pangolins would have to been killed to cull that amount. As usual, in the end there is just an oblivious and greedy human hand, tipping the world’s balance.

Et cetera. How long can one go on in any single week? 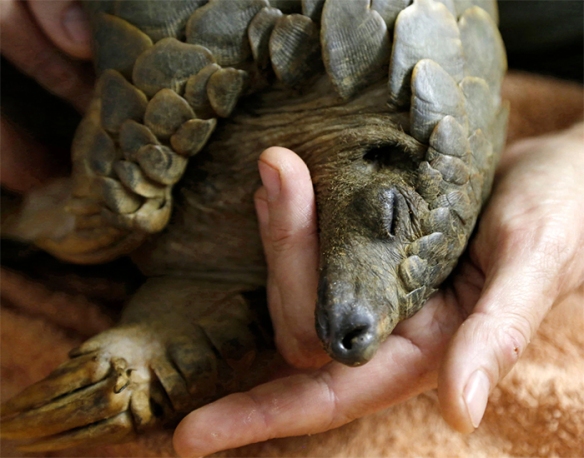 A pangolin rescued from poachers in South Africa.

In past weekly challenges, we’ve tried to get a better feel for this changing Earth, searching for local textures of Earth colors like fire and water. We’ve searched for resonance in ghosts and grief and sought ways to reach out to our animal family. We’ve tried to find new ground in renewal and hope.

That our daily language falls way short of expressing the depth and magnitude of these things—surface chatter of frighteningly deep ocean roar—it seems to me that our work as poets must be to find fuller expressions for a changing Earth. And as a global phenomenon, that work must include a diverse ecosystem of local voices.  It can’t just sound like Florida or Vancouver or New Delhi or Cape Town, but it does sound like a combination of all. High tech human civilization has lost most of its roots, so we have to recover nourishing sources and reclaim ruined terrain.

Our vocabulary desperately needs to enlarge and find nuance. Eskimos have many, many words for snow, but I wonder how many new ones are needed to describe the myriad moments and qualities of an Arctic in retreat. Glenn Albrecht—the originator of the term solastalgia which we explored at earthweal a few weeks ago—has a new book out titled Earth Emotions: New Words for a New World, and in it he explores what he calls a psychoterratic vocabulary, naming positive and negative perceived and felt states of the Earth. His list includes sumbiology, the study of humans living together with the totality of life; terrafurie, extreme anger unleashed in those who witness the damage of techno-industrial society; and Symbiocene, a coming era in Earth history when humans make no discernable impact on the planet other than leaving their temporary remains behind. (Yay.)

This work of naming is not easy work, and all if it may be moot; the thing we have invoked may be the dragon of our dust. But what else are we to do? Narrow similes in heated rooms—the verbal stereotypy of lah-de-dah business as usual, everything’s fine here—is characteristic of narcotically happy places, those dreamlike suburbs of the real. It is the music of stalemate, the long half-life of decadence, where daily life “is the victim of its success.” (Russ Douthat, “The Age of Decadence”)  I submit that anti-life is killing our poetry as much as it is our world.

What beats so gloriously in a great poem is accidental in one sense—grace is no human invention—but it is also difficult. Online makes publication of anything easy, but poems which get to the heart of things must be carefully and diligently shaped. Farm work is hard labor, but as Wendell Berry writes, in farming and in poetry its difficulty is its possibility.

In one of Rilke’s famous exchange of letters to a young man struggling to decide on the vocation of poet, he writes about the difficult and its importance in our work:

Most people have (with the help of conventions) turned their solutions toward what is easy and toward the easiest side of the easy; but it is clear that we must trust in what is difficult; everything alive trusts in it, everything in Nature grows and defends itself any way it can and is spontaneously itself, tries to be itself at all costs and against all opposition. We know little, but that we must trust in what is difficult is a certainty that will never abandon us; it is good to be solitary, for solitude is difficult; that something is difficult must be one more reason for us to do it.

Finding sufficient language for a vastly changing Earth—including a radical revision of humanity’s place, importance, and work in it—is damned difficult work. For me, it’s like trying to write a sublime poem that doesn’t rhyme, or says everything in less than ten lines.

Writing a poem that speaks more with the Earth’s voice than mine—that is exceptionally difficult. The spacetime calibrations of meter and rhyme work for traversing the human hell, but what of the wilderness beyond? But if I don’t engage and labor and revise and find, all that’s left for me is drone; easy stuff, like happy hour in an opioid shooting gallery, painless and free, just heart and lungs way low and just either side of mortality’s gate.

Jack Gilbert wrote gorgeous poetry, but he was a relentless, never-satisfied reviser; difficulty was one essential ingredient.  (The patience to wait for the good stuff all the way in back was the other.) Who know how long it took to finish the following poem about getting to the heart of language:

THE FORGOTTEN LANGUAGE OF THE HEART

How astonishing it is that language can almost mean,
and frightening that it does not quite. Love, we say,
God, we say, Rome and Michiko, we write, and the words
get it all wrong. We say bread and it means according
to which nation. French has no word for home,
and we have no word for strict pleasure. A people
in northern India is dying out because their ancient
tongue has no words for endearment. I dream of lost
vocabularies that might express some of what
we no longer can. Maybe the Etruscan texts would
finally explain why the couples on their tombs
are smiling. And maybe not. When the thousands
of mysterious Sumerian tablets were translated,
they seemed to be business records. But what if they
are poems or psalms? My joy is the same as twelve
Ethiopian goats standing silent in the morning light.
O Lord, thou art slabs of salt and ingots of copper,
as grand as ripe barley lithe under the wind’s labor.
Her breasts are six white oxen loaded with bolts
of long-fibered Egyptian cotton. My love is a hundred
pitchers of honey. Shiploads of thuya are what
my body wants to say to your body. Giraffes are this
desire in the dark. Perhaps the spiral Minoan script
is not language but a map. What we feel most has
no name but amber, archers, cinnamon, horses, and birds.

Who knows: but certainly the result was worth the wait.

Now let’s see what news of our changing world we fine, way back there on the best shelves of our work!