Welcome to earthweal’s open link weekend #27! Pop a cork and light a sparkler by linking a poem that best suits your own theme or mood, be it new or one of your greatest hits. Include your location in your link so we get a feel for the breadth of global reportage. And be sure to visit your fellow linkers and comment!

Open link weekend ends at midnight EST Sunday night to make room for next Monday’s weekly challenge. Sarah Connor takes up the reins this time with one titled LOOKING FOR A NEW HIERARCHY. You know will find it stimulating, fun and rewarding—poetic meat and a hoot. 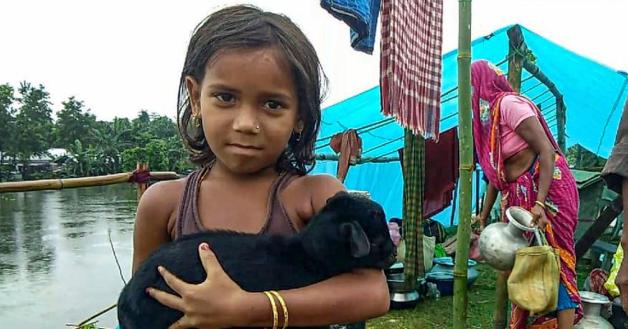 A family in the flood-hit district of Assam in north-east Assam, June 29, 2020. Photo: PTI

Summer is in full swelter now, from Florida up to the Arctic. Dangerous heat indexes are forecast this weekend for the Gulf coast region of the US, with 100-degree heat across Texas and storms ratcheting across the Northern Gulf with tropical storm potential. Not hotter, though, than the Arctic circle, where a 6-month heat wave is fast melting summer ice and balding back massive tracts of permafrost. Elsewhere, southern China has seen 31 straight days of torrential rainfall, with reservoirs and dams giving out and some 15 million residents affected. Yangshuo, a tourist town known for its stunning mountain vistas, experienced a once-in-two-centuries burst of heavy rain on June 7. Flooding from heavy rainfall is also affecting the north-eastern Indian state of Assam, with 1.5 million residents in 2,000 villages affected. The flooding is hampering efforts to contain the Baghdan oil well fire which has been burning since June 9.

Though all of these events resulting from a heating climate are disturbing, the Arctic heatwave is the perhaps the most troublesome. The Arctic is warming twice as a fast as the rest of the world—much faster than scientists though it would in response to rising levels of carbon dioxide in the atmosphere. The high of 38 degrees Celsius (just over 100 degrees Fahrenheit) recorded on June 20 in the Siberian town of Verkhoyansk, just north of the Arctic Circle, was the highest temperature ever recorded in the Arctic, some 30 degrees F higher than previous recorded highs. If our climate had been stable, it would have been classified as 1-in-a-100,000-year event, but Arctic heating is nothing but an unproar.

On June 19, ground surface temps of 45C (113F) were recorded across the region—that’s 113F—ground temps are usually higher than air temperatures we normally see in weather analysis—but imagine that kind of heat on permafrost and sea ice. We saw that with the May 31 collapse of a Russian oil tank in Siberia due to melting permafrost, spilling some 20,000 tons of diesel fuel into the nearby Ambarnaya River. The spill was two-thirds the size of the Exxon Valdez spill, but the news was fleeting amid so many other catastrophes concurrent in our daily world.  (Like a COVID pandemic which, thanks to folks like us dum dum US citizens stuck in a spiraling first wave, is threatening to soon mount a second worldwide wave…) 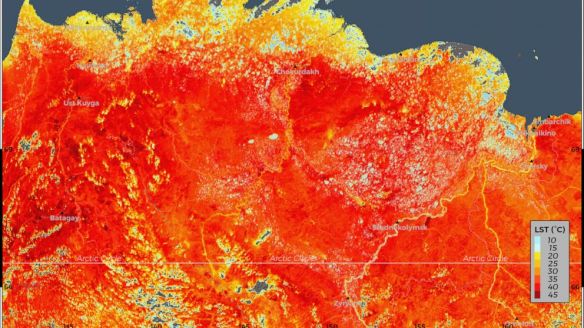 Still, think of it: if global warming at 1.1 degrees C above the norm is producing this— and doing it at a speed we hadn’t expected for decades— what does that bode for our future? Current projections of staying within 2C of warming are withering fast; one analysis puts those chances now at .3 percent if Trump is defeated in November. (And if he wins re-election? .1 percent, or one in 1,000).

An Australian climate scientist still recovering from continent-engulfing wildfires earlier this year writes of an updated forecast of warming in Australia (based on 20 forecast models) of 4.5 degrees Centigrade by the end of the century, with a range between 2.7 and 6.2 degrees Centigrade. The 2 degree target is now forecast to pass around 2040. “If the new models turn out to be right, there is no way we can adapt to the catastrophic level of warming projected for a country like Australia,” he writes.

Some of our most precious ecosystems will never recover, including some of what was destroyed in Australia during our Black Summer. Gutted landscapes will struggle on, trying to regain some semblance of an equilibrium. But the truth is the destruction we have unleashed will reverberate throughout the ages.

We are witnessing the unthinkable. Facing the unimaginable.

The hard learning the United States is getting in Pandemic Essentials 101—what a failure here, especially in states like Florida where I live (10,100 new cases yesterday, a nationwide record and helping the US to set a new global record of 55,000 new cases for the day)—repeats an old lesson from my oracular blog namesake St. Oran: The way you think it is is not the way it is at all. Straight commonsense thinking doesn’t do much good when you’re playing 3D chess with the Devil. (What does that do to poetry of the heart, we have wondered.)

As an epidemiologist recently explained in a series of tweets, it isn’t the number of daily COVID tests related to test positivity rate which concerned her (the one I’ve thought refuted folks like Vice President Mike Pence’s complaint that testing is causing the pandemic), but what is swimming behind that data. “What we see in states like Florida is a sharp rise in the numbers of new cases,” she Tweeted. “It is the pace of growth that alarms me, and the fact that positivity is rising along with it. As policy hasn’t changed over the last few weeks, what stops it from rising more?” The shadow in the swarm in negative reverse is a diving peregrine falcon—how fast this COVID now spreads.

Making sense of climate change requires more than trying to determine where on a particular linear plot we are and where on it we are likely to be in ten years, or in fifty. It may require more profoundly revising our sense of linearity itself. In this way, global warming isn’t just scrambling our sense of geography, with Verkhonaysk, at least briefly, playing the role of Miami. It is also scrambling our sense of time. You may feel, because of the pandemic, that you are living to some degree in 1918. The arctic temperatures of the past week suggest that at least part of the world is living, simultaneously, in 2098.

Remember the Clockwork Green challenge here back in February? We tried to make sense of the asynchronous coincidental speeding wheelworks of climate change. It was dizzy stuff, and a theme which underlies news of five five-hundred year floods in Houston over the past five years or a hundred-thousand year heat event in the Arctic Circle, followed by what’s to come in a 2 or 3 or 4C hotter climate arriving faster than anyone believes (and exactly the way COVID feasts on beliefs). Wallace-Wells again:

Perhaps the most important lesson of the freakish Siberian heatwave is: However terrifying you find projections of future warming, the actual experience of living on a heated planet will be considerably more unpredictable, and disorienting.

Well, that’s what we’re here for, folks, shelter from upside-down storm and welcome to a bedraggled sense of things. Maybe what we struggle to say comes from the Earth itself. Great essay about the melt of Siberian permafrost by Heather Altfeld, “The Magical Substratum,” appearing in Earth Elegies, #73 in Bard College’s bi-annual Conjunctions series and published in 2019. (Sure wish I could find an online link, but sorry.) Daniel Fisher, a professor of paleontology and evolutionary biology at the University of Michigan, tells her,

We have translated the eco-crises in the Arctic into our own terms—terms that make sense to us, statistics of melt and temperature change, empiric projections—but these terms do not represent the animistic view of native Siberians. Our scientific terms to not capture the actual problem, which the Siberians would say is one of great disruption to the land’s spirit. The eco crisis we are experiencing involves many souls, because the land has a spirit, and if it is angry, and it can’t be appeased, then what are they supposed to do?

What is the point, then, between a cosmology that centers around the natural world, and one that centers around our importance in it? It is this: If the personification of an animal or a tree gives us the sense that we are all in this together, then their suffering is our suffering, their deaths are our deaths, and their souls are inextricably bound up with ours.

Things to brood over this weekend. Sarah Connor’s prompt on Monday will open wider doors for us all.

For now, I leave you with a poem by Joy Harjo, our current US poet laureate. May it, for now, suffice …

Once there were songs for everything,
Songs for planting, for growing, for harvesting,
For eating, getting drunk, falling asleep,
For sunrise, birth, mind-break, and war.
For death (those are the heaviest songs and they
Have to be pried from the earth with shovels of grief).
Now all we hear are falling-in-love songs and
Falling apart after falling in love songs.
The earth is leaning sideways
And a song is emerging from the floods
And fires. Urgent tendrils lift toward the sun.
You must be friends with silence to hear.
The songs of the guardians of silence are the most powerful—
They are the most rare.