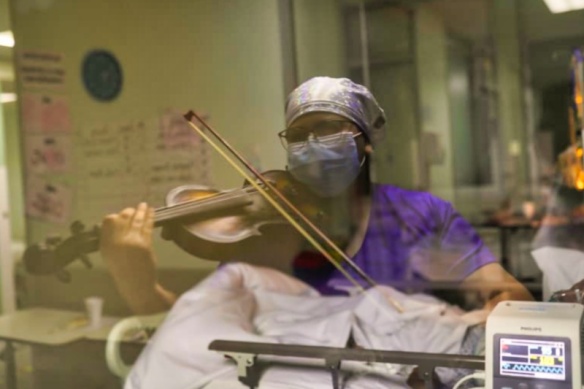 The scroll of scary climate events continues apace—and why wouldn’t it? Pandemic may have temporarily flattened the carbon-spew curve, but there’s nothing in our eventual economic recovery to suggest there has been any real change in humanity’s infrastructure or appetite for oil.

Most scientists now find it highly unlikely we’ll be able to keep to 1.5 degrees C of warming by the end of the century; in fact, the consensus prediction is that we’ll pass that mark in a decade and be somewhere in the 4-6 degree C range by 2099.

Those are scary numbers, but does that budding knowledge make any difference? It’s not even clear that a significant immediate catastrophe will drive humanity toward decisive enough action. Six months after continent-consuming wildfires and the third bleaching event in the Great Barrier Reef in five years, Australia’s global warming woes seem almost forgotten Arctic fires are burning unabated, vicious rains fall on the far East and “unseasonable” heat (that’s a rich term nowadays) swelters the southern US. (God, it’s hot here today.)

Pandemic adds a double whammy for these problems; in places like Arizona where the infection rate is three times the national average, staying indoors to beat the heat just increases the chances for spreading. Here in Florida, disaster relief officials are scrambling to work out alternatives to group shelters in case of hurricane evacuation.

But double—or even triple—threats coming at us as the result of climate change don’t seem to stir much response from humanity; we just hunker down and get used to it. Nowhere is this as evident as in the US where its government turns a blind eye to the pandemic as it infects soaring numbers of citizens.

Maybe we got used to this head-in-the-sand tactic suffering through a Trump presidency. Someday he will get voted out, some day there will be a vaccine; til then it’s to the bunkers, mateys, where there’s streaming on Netflix.

Lord knows what the world will look like when we emerge …

David Roberts at Vox examined this bewildering lack of response to a crisis which will have lasting effect for thousands, perhaps millions of years.

Contrary to the notion which many climate activists have that when things get bad enough, people will change, Roberts wonders if such a change will ever come.

In July 9 post titled “The Scariest Thing About Global Warming (And Covid-19)”, he suggests a very scary alternate possibility:  “Humans often don’t remember what we’ve lost or demand that it be restored. Rather, we adjust to what we’ve got.”

No moment of reckoning arrives. The atmosphere becomes progressively more unstable, but it never does so fast enough, dramatically enough, to command the sustained attention of any particular generation of human beings. Instead, it is treated as rising background noise.

The youth climate movement continues agitating, some of the more progressive countries are roused to (inadequate) action, and eventually, all political parties are forced to at least acknowledge the problem — all outcomes that are foreseeable on our current trajectory — but the necessary global about-face never comes. We continue to take slow, inadequate steps to address the problem and suffer immeasurably as a result.

Roberts looks to conservation studies to back this up. In 1995 an ecologist studying depleting fisheries declared that fish were going extinct under the radar of observation due to what he called “shifting baselines.”

Consider a species of fish that is fished to extinction in a region over, say, 100 years. A given generation of fishers becomes conscious of the fish at a particular level of abundance. When those fishers retire, the level is lower. To the generation that enters after them, that diminished level is the new normal, the new baseline. They rarely know the baseline used by the previous generation; it holds little emotional salience relative to their personal experience.

… A given generation of fishers becomes conscious of the fish at a particular level of abundance. When those fishers retire, the level is lower. To the generation that enters after them, that diminished level is the new normal, the new baseline. They rarely know the baseline used by the previous generation; it holds little emotional salience relative to their personal experience.

In essence, a “generational amnesia” allows a fish to become smaller and rarer until it’s no longer known and then vanishes.

The same idea of shifting baselines applies to climate change. “Few people are aware, in a conscious way, of how many hot summer days were normal for their parents’ or grandparents’ generation. Recent research shows that “extremely hot summers” are 200 times more likely than they were 50 years ago. Did you know that? Do you feel it?”

Shifting baselines in the collective also repeat in the individual experience. There is a personal amnesia “where knowledge extinction occurs as individuals forget their own experience.”

“There is a tremendous amount of research showing that we tend to adapt to circumstances if they are constant over time, even if they are gradually worsening,” says George Loewenstein, a professor of economics and psychology at Carnegie Mellon. He cites the London Blitz (during World War II, when bombs were falling on London for months on end) and the intifada (the Palestinian terror campaign in Israel), during which people slowly adjusted to unthinkable circumstances.

“Fear tends to diminish over time when a risk remains constant,” he says, “You can only respond for so long. After a while, it recedes to the background, seemingly no matter how bad it is.”

Is there anything we can do to prevent shifting baselines from allowing us to sleep through the climate emergency during its more dire and transformational decades? You would think so, as “the human propensity to rapidly adapt is part of our evolved cognitive and emotional machinery.” But we need a baseline, and for that we have to recall the past. We can’t rely on our innate memory; it only takes about two to ten years to erase our experiential reference points.

Traditional culture embodies memory in the land, language and the people. The wisdom of the tribe carried by the ancestors into the present. Much of that has been lost.

That kind of historical consciousness — a day-to-day awareness of the obligations that come with being a good ancestor — has faded. And modern consumer capitalism might as well be designed to erase it, to lock everyone into an eternal present wherein satisfying the next material desire is the only horizon.

In lieu of traditional culture, a nation’s leaders, their governance and laws can help regulate history and slow and perhaps reverse a rapid degradation of the baselines.

Studying and understanding the long arc of history, considering the experience of previous generations and the welfare of coming generations, making decisions with the long view — those are things leaders are supposed to do.

The most reliable way to stop baselines from shifting is to encode the public’s values and aspirations into law and practice, through politics. They can’t be held steady through acts of collective will. They have to be hardwired into social infrastructure.

Unfortunately, US politics has become almost completely unresponsive, which reinforces rather than ameliorates our slipping baselines. One crucial part of registering a crisis as a crisis is a sense of agency, and Americans increasingly feel that they have no ability to shape national policy.

One of the only places left where that can happen now is in the arts. (Roberts also says that journalism can play a role in this, but that’s for another tribe to address.) As sites of culture, our poems can preserve the view of history, the presence of elders among the living and the memory of an ensouled and enervated landscape.

Poetry can apply brakes to our acquiescence to loss, questioning the process of letting important things go without the disaster of grief, as in this classic by Elizabeth Bishop:

The art of losing isn’t hard to master;
so many things seem filled with the intent
to be lost that their loss is no disaster.

Lose something every day. Accept the fluster
of lost door keys, the hour badly spent.
The art of losing isn’t hard to master.

Then practice losing farther, losing faster:
places, and names, and where it was you meant
to travel. None of these will bring disaster.

I lost my mother’s watch. And look! my last, or
next-to-last, of three loved houses went.
The art of losing isn’t hard to master.

I lost two cities, lovely ones. And, vaster,
some realms I owned, two rivers, a continent.
I miss them, but it wasn’t a disaster.

—Even losing you (the joking voice, a gesture
I love) I shan’t have lied. It’s evident
the art of losing’s not too hard to master
though it may look like (Write it!) like disaster.

That’s the scope of this week’s challenge, anyway. Observe shifting baselines in your world, in climate change, your nation’s governance, the pandemic. How are we changing? What has been lost? Is there an experience which demonstrates the vanishing act between generation or in your own life story? Or write about the importance of poetry in a vanishing and increasingly silent world. What has the tradition of poetry lent to your life and the world about you? How have you passed it on to the young? How can poetry’s voice and authority be preserved?

We are fast losing the vestiges of our voice—this work is important! Else we join the rest of humanity frogging our boil.

3 thoughts on “earthweal weekly challenge: A SONG FOR SHIFTING BASELINES”