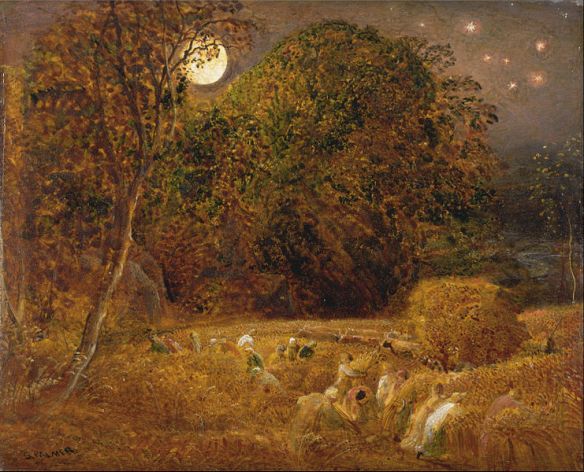 September 29 is the Festival of St. Michael, patron saint of ocean-farers, boater of the dead to the afterlife and, down deeper, the old sea-god Manannan.

According to Carmichael, “As patron saint of the sea St. Michael had temples dedicated to him round the coast wherever Celts were situated. Examples of these are Mount St. Michael in Brittany and in Cornwall, and Aird Michael in South and North Uist, and elsewhere.” (Carmina Gadelica, 77)

Falling near the autumn equinox, the festival is one of four solar “quarter days” through the year, Lady Day (March 25), Midsummer (June 21), Michaelmas and Christmas (December 25). The pagan festivals which preceded them fall on “cross-quarter” days are midpoints between equinoxes and soltices – Candlemas (Feb. 2), Beltane or May Day (May 1), Lammas (August 1) and Samhain (Nov. 1) The act of giving on Michaelmas is a form of farewell to the productive year and a welcome to the new cycle which begins with a slow retreat and dying.

There are similar solar festivals in Hinduism and Buddhism; Islamic festivals follow the lunar calendar.

On the 29th of September a festival in honour of St. Michael is held throughout the Western Coasts and Isles. This is much the most imposing pageant and much the most popular demonstration of the Celtic year. Many causes conduce to this—causes which move the minds and hearts of the people to the utmost tension. To the young the Day is a day of promise, to the old a day of fulfilment, to the aged a day of retrospect. It is a day when Pagan cult and Christian doctrine meet and mingle like the lights and shadows on their own Highland hills.

These Celtic-Christian festivals have all but vanished, though you can find Renaissance fairs and medieval reenactors celebrating them in some form. (At my father’s Columcille, fairly robust Samhain and Beltane festivals have been celebrated for two decades, though the liturgy is fanciful and ecumenically scattershot. In 1995 I held create a Michaelmas festival for the community.)

Festivals were great gatherings of the human community in celebrations of unity, culture, common purpose and faith. Modernity has ebbed greatly those qualities, and festivals are marginal, not central.

We have also learned much about the greater community humans are just one part of. It has not been an easy education for any. Mastery by a species both terribly powerful and awfully blind has shadowed much of Earth’s future.

Accelerating climate change brings to the horizon many firsts that are hard to face, much less accept—2020 alone, 5 million acres of burnt wilderness out in US West still early in the fire season, 40 million acres in Australia, 380 dead pilot whales in Tasmania, 356 elephants dead of toxic algae in Botswana, millions of birds suffocated by Western wildfire smoke, 3 billion animals expired in Australia, sea life greatly vanquished by ocean heat waves. Every week I have a new list; but rather than account these as firsts, one scientist recommends that we think of them as the last time we will only see this much destruction in the fast-heating 21st Century.

As the global year’s tide now turns—toward winter in the Northern Hemisphere, and summer in the South—I wonder what Michaelmas festival poems of the Anthropocene look like. Can we sing to the elements, sing to the depths, sing to the animals, sing to the change and its ghosts, and sing to our fellows? There’s no going back to pre-Christian 400 AD, much less the suburbs of the 1950s: We must comfit ourselves to this turning page. Maybe the music can only sound ironic and dreadful; maybe not. It is up to us to find out.

So what is your Michaelmas poem(s)?