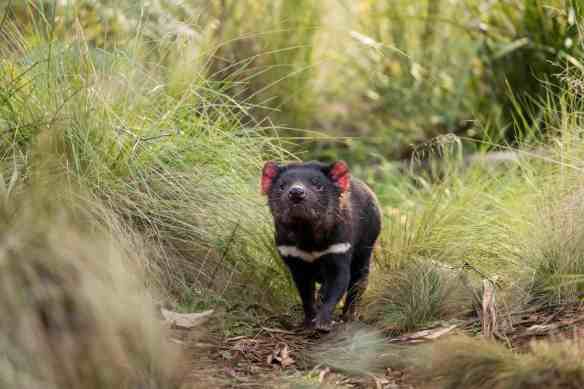 A Tasmanian devil in mainland Australia. Tasmanian devils have been released into the wild on Australia’s mainland, 3,000 years after the feisty marsupials went extinct there, in what conservationists described as a ‘historic’ step. (Getty Images) 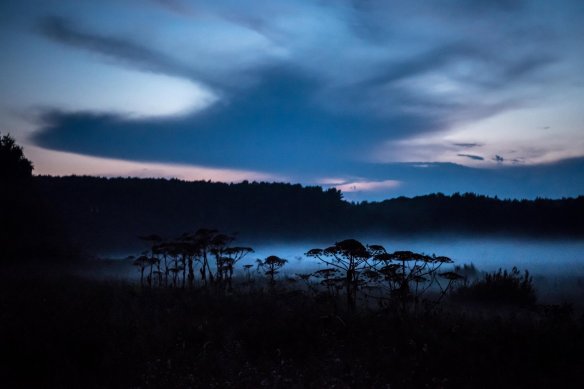 We visited ghosts in an earlier challenge this year, but since it’s October I’d like to revisit our earthweal sights on the haunted world we’re inheriting and ever in the act of passing on. Extinction is the chilling, ever-growing shadow formed by the Anthropocene: the haunting is vast.

As I continue through Rebecca Giggs’ fine new book Fathoms: The World in the Whale, I come to see the connection between oceans far emptier of these lumbering cetaceans and the twilight (and first light) just outside my window now almost wholly devoid of birdsong. The two are imbued in the same haunted silence. She writes:

The Australian philosopher and ethicist Thom van Dooren has an idea I’ve found long compelling: that when animals die out, the cultural and ecological relationships that furnish their existence can be experienced as a kind of nonstop haunting. Van Dooren is interested in the kinds of stamina that attend extinction and endangerment — how vulnerable animal species … don’t just disappear in a snap but continue to be revealed after their passing in different varieties of fortitude and mourning, both in human societies and in the lives of interdependent organisms. When a creature is gone, its significance may grow … So long as a feature doesn’t steer its proprietor into co-extinction … there will be a kind of ghostly residue: a physical communication with no visible respondent. A fascinating notion: that the too-muchness of the flower might point out a lack in the world. (45)

Aboriginal whale hunts in Sydney Harbor were ended by European whalers who fished the waters out, so to speak; yet the whale remained vast in Cammerayagal custom—perhaps moreso as a ghost. “Whale masks might have looked even more like monsters to the person who had never seen a whale,” Giggs writes “Perhaps whale dreams, without real whales to satisfy their inference, were received as dictates from the realms of the ancestral past instead of the animalic future. But whoever surreal or mythic a whale became, the animal itself was not forgotten.” (46)

Fathoms makes huge the spectral cultural remnants of that once-populous tribe, as an account in itself and a critique of the modernity which slaughtered it to the point of extinction. It is at the far end of the modernity where we now stand; it is here that our witness, our next poems, are challenged to keep the fading memory of whales—of the living, diverse and thriving Earth— alive. It is for us to take up the whale mask and sing the haunted verses.

Thom van Dooren put it this way in a separate essay:

Ours is a time of mass extinction, a time of ongoing colonization of diverse human and nonhuman lives. But it is also a time that holds the promise of many fragile forms of decolonization and hopes for a lasting environmental justice. Here, the work of holding open the future and responsibly inheriting the past requires new forms of attentiveness to biocultural diversities and their many ghosts. But simply beyond listening, it also requires that we take on the fraught work—never finished, never innocent—of weaving new stories out of this multiplicity. Stories within stories that bring together the diversity of voices necessary to responsibly inhabit the rich patterns of interwoven inheritance that constitute our world. (“Spectral Crows in Hawai’i,” anthologized in Extinction Studies: Stories of Time, Death and Generations (ed. by Deborah Bird Rose, Thom van Dooren and Matthew Chrulew, Columbia University Press, 2017, p. 207)

For this challenge, write of haunted wilderness. What is the resonance of those lost relations? What has grown more significant in absence? What evidence of their passing lingers in co-dependent species? What would an ecosystems composed of myriad hauntings look and sound like? How is the magnitude of that changing in the Sixth Extinction? (Can a single whale’s song now be heard around the world?) How is human culture absorbing this magnified absence? Can seeds of renewal to be found, planted in cold moonlight? What new possibilities and futures might arise from such wild dearth and death?

We are makers: Let’s put our ungodly powers to good use! 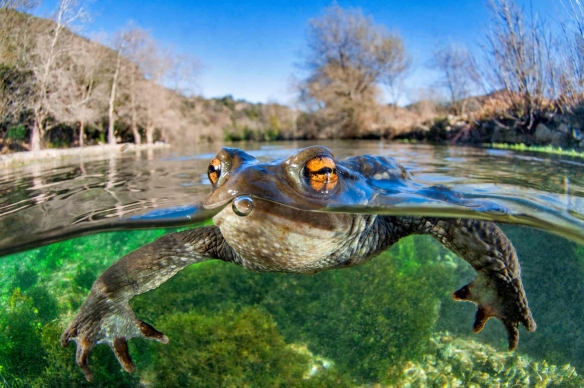