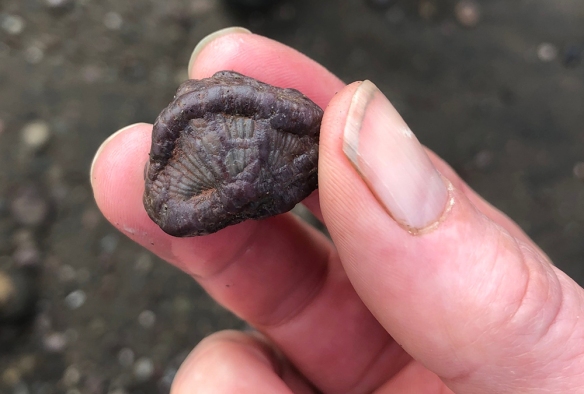 We live amid aeons. Beneath my house here in Florida is sand from seas a million years old, and sediments washed here as the Appalachian mountains eroded from Alps to rolling headless shoulders. Ninth Avenue was built from crushed limestone, the foundation of this state. The tap water used for the coffee I drink is siphoned from an aquifer of fresh water about 25 thousand years old. I was baptized in the Atlantic ocean at age 14, just when the Now was flooding through me in a torrent; the wave which rolled over me and somehow through me was composed of salt water 3 billion years old. The air I breathe was created 3.5 billion years ago and I have shared it with settlers and squanderers, gators and vultures, pine and camellia and dollarweed.

These hands on the keyboard are 63 years old in this incarnation, but they flourish from a 3- million-year legacy of homonid existence, bound to an apelike mammal existence 11 million years long and mammals dating back 200 million years. I have my mammal ancestors to thank for the womb in which my ideas are conceived, the generating heat of a thought, the convoluted sense of glyphs carved into white space.

And these hands are inheritors of articulation – wings, fins, claws, suckers — means of grasping water and air, love and prey.

Yes, the moment is all. A few of them ago I had no idea what I was going to write about, now I’m bouncing around in this huge echo chamber homo sapiens calls time. It’s the embryonic fluid washes through all life and reverberates in mineral and other orders of nonlife. And it’s present only for a moment’s notice and then gone into the immense background we take for granted as dailiness.

Like stars. Light from stars arrives from thousands, millions of years ago, even more. The star SMS J031300.670839.3 is 6,000 light-years away from Earth, meaning its flicker tonight is 6,000 years old. That star is also 13.8 billion years old, formed at the beginning of our known universe, so its light is also of the oldest vintage. Another star, Icarus, was discovered by the Hubble Space Telescope in a spiral galaxy so far from the Earth its light takes nine billion years to reach here. A walk in starlight is an eerie symphony of deep time. Who knew?

Stars also teach us about afterlife, the lingering of the gone in the present. Most visible starlight comes from active stars, though many stars in the most distant galaxies are long gone. And there’s no difference between living light and dead light. It’s all radiance.

Extinct species live on the vast diffusion of the life which evolved from them. In the human temporal bandwidth, there is a narrower resonance of the gone amid the living. We live in an era that witnesses the vanishing of most megafauna; in a few more, giraffes and hippos and whales will only be observable in zoos and videos preserved on eternal servers. Petroglyphs survive from early human history, often glorying in species that vanished thousands of years ago—cave bears and ibexes and woolly mammoths. The petroglyphs will probably outlive electronic media, which means the culture most aware of itself will probably be the most silent in the deep time to come.

In his book Underland, Robert MacFarlane describes the sweep of time in the ground beneath our feet and the crucial lessons we may learn there:

‘Deep time’ is the chronology of the underland. Deep time is the dizzying expanses of Earth history that stretch away from the present moment. Deep time is measured in units that humble the human instant: epochs and aeons, instead of minutes and years. Deep time is kept by stone, ice, stalactites, seabed sediments and the drift of tectonic plates. Deep time opens into the future as well as the past. The Earth will fall dark when the sun exhausts its fuel in around 5 billion years. We stand with our toes, as well as our heels, on a brink.

There is a dangerous comfort to be drawn from deep time. An ethical lotus-eating beckons. What will our behaviour matter, when Homo sapiens will have disappeared from the Earth in a blink of a geological eye? Viewed from the perspective of a desert or an ocean, human mortality looks absurd — crushed to irrelevance. Assertions of value seem futile. A flat ontology entices: all life is equally insignificant in the face of eventual ruin. The extinction of a species or an ecosystem scarcely matters in the context of the planet’s cycles of erosion and repair.

We should resist such intertial thinking; indeed, we should urge its opposite —deep time as a radical perspective, provoking us to action not apathy. For to think in deep time is a means not of escaping our troubled present, but rather of re-imagining it; countermanding its quick greeds and furies with older, slower stories of making and unmaking. At its best, a deep time awareness might help us see ourselves as part of a web of gift, inheritance and legacy stretching over millions of years past and millions to come, bringing us to consider what we are leaving behind for the epochs and beings that will follow us. (15)

Deep time as a digestor and coagulator of human time: the long view in which plates move, mountains form and erode, plateaus are shaped by rising and falling seas, resting for a moment in this pinprick awareness called human time before moving on: It does something, to posit our work and contributions as part of the starlight.

Let’s see what happens when we focus our poetic eyes on the presence of deep time:

Not to feel the grasses brush my knees, as if wading
for the first time into the ocean, but a different prayer —

this was after declaring, These trees are my bones,
and I could feel myself loosed from tendons, muscles,
and sinew, a skeleton knocking, as a chime
against nothing, and in my marrow
the blood of sap, the rungs of pinecones,
and myself, inside myself, telling me this —

to make an alphabet of stammering, a song
of a cry, to be anything buzzing with blood
or wings, anything alive, including grief, because
isn’t that — I aske the trees, my bones forest
framing me — what my long ago dead dreamed,
tossed in their short allowance of night?

The world
was whole because
it shattered. When it shattered,
then we knew what it was.

It never healed itself.
But in the deep fissures, smaller worlds appeared:
it was a good thing that human beings made them;
human beings know what they need,
better than any god.

On Huron Avenue they became
a block of stores; they became
Fishmonger, Formaggio. Whatever
they were or sold, they were
alike in their function: they were
visions of safety. The salespeople
were like parents; they appeared
to live there. On the whole,
kinder than parents.

Tributaries
feeding into a large river: I had
many lives. In the provisional world,
I stood where the fruit was,
flats of cherries, clementines,
under Hallie’s flowers.

I had many lives. Feeding
into a river, the river
feeding into a great ocean. If the self
becomes invisible has it disappeared?

That’s what the sea is:
we exist in secret.

I had lives before this, stems
of a spray of flowers: they became
one thing, held by a ribbon at the center, a ribbon
visible under the hand. Above the hand,
the branching future, stems
ending in flowers. And the gripped fist—
that would be the self in the present.

Links for this challenge until Friday afternoon at 5 PM EST, then its open link weekend.

Next Monday Sarah begins a series on calendar festivals with one on the lunar festival of Imbolc.

Let’s have some fun in ye olde sandbox!