Ingrid Wilson, a regular earthweal contributor from her blog Experiments in Fiction, has just announced the July 24 publication of her poetry anthology The Anthropocene Hymnal. In it she has assembled 63 poems from 34 poets across the world in what she calls “a unique response to an unprecedented crisis.” Included in the lineup of poets are many earthweal participants (see below).

The book is available both in e-pub and print, and advance Kindle sales are now available at Amazon.  According to Ingrid, all profits from sales of the book will be donated to the World Wildlife Fund.

Lindi-Ann Hewitt-Coleman (a wonderful earthweal contributor from South Africa with her blog fresh poetry) wrote an advance review of The Anthropocene Hymnal, and it’s the perfect introduction to the work. “The Anthropocene Hymnal is both a voice of our time beautifully sung and a call to action,” she writes. You can read Lindi’s review in full here.

Ingrid consented to the following brief interview about her process with The Anthropocene Hymnal, and I reprint our email exchange in full.

Tell us something about yourself.

I’m a wandering soul. I’m from the north of England and have lived in Manchester, Newcastle, London, Barcelona, Malaga and both the north and south of Slovenia (where I live now). My head is a muddle of different languages and places. If nothing else, I think this helps my poetry. I also like to wander back in time and have studied ancient history and lost languages. There’s something inherently poetic about a language which is no longer spoken by anyone.

How did you come to create an anthology of Anthropocene-themed poems?

earthweal was my primary inspiration for the creation of this anthology. I’ve always been attracted to nature poetry, but recent circumstances have led me towards ‘what have we done to nature’ poetry, or eco-poetry, if you prefer. Writing for earthweal distilled my concerns for the planet into impassioned poetry, and I was moved by the work of other poets who I came to know through this forum. It occurred to me that such poetry deserved a book of its own.

Who are some of the folks who contributed?

I had an open call for submissions, and I also asked some of the earthweal contributors for permission to use specific poems. As a result, I have ended up with poetic voices from five continents, all with their own particular style and grace. Amongst the contributors are earthweal’s own Brendan {offline name David Cohea}, Sherry Marr and Sarah Connor. I have published the full contributor list on my blog, and you may well be familiar with many of them. I also wanted to leave a space for young voices in the anthology, as they will inherit the anthropocene future we create. The youngest contributors are Rishika Jain (aged 13) and Benji (My eldest son, aged 8). 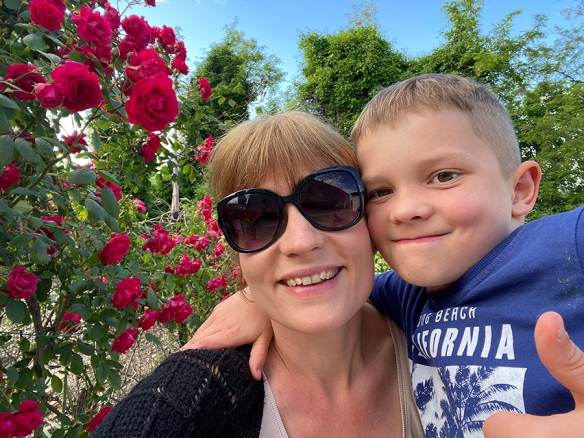 What have you learned about the Anthropocene from your effort?
The first thing that strikes me every time I write the word is that my keyboard still doesn’t recognise it. I find this incredible. It recognises ‘twerking’ and ‘selfie’ but not the this man-made era into which we have slowly sleepwalked. The term was coined in the 1960s but gained popularity only recently, when denial that we are living in a new and dangerous era is all but impossible. I think by the time climate deniers start to change their minds, it will probably be to late, which may be a Catch-22 situation. Still, I refuse to go down without a fight.

Where did you get the cover artwork from? It’s incredible.
The cover artwork is a collage by New York based artist and poet Kerfe Roig. I think most visitors to earthweal will be familiar with her visually stunning and thought-provoking work. Kerfe also contributed four poems to the anthology.

How are you planning to sell the book?
I will sell the paperback and e-book via Amazon, and a PDF download via my website. I realise given the themes of the anthology that Amazon may not be the most appropriate outlet for the book, but I do not have the printing and distribution power that such a behemoth can offer. Love them or hate them, they will bring my book to a wider audience, which I think must be a good thing. I plan to donate all of my royalties to WWF, the charity selected by my readers.

What have you learned from the process?
For some reason, when I started the project, I thought an anthology would be easier than a collection of my own work, because I wouldn’t have to write all of the poems myself. I have learned the opposite to be true. There is so much to consider when compiling the work of others: permissions, rights, the order of the poems, layout of text, variations in punctuation and spelling, names and pseudonyms. I tried my best to make sure everyone who contributed will be happy with the result. I certainly am!

What poetry is needed for the challenges ahead?
Poetry which does not compromise. Poetry which looks Big Money in the eye and says, ‘you are to blame.’ Poetry which is not afraid to be shot down or burned. Poetry which can rise from the ashes of censorship and ignorance and be heard even louder because of the attempts to silence it. As soon as people start to listen, such attempts will be made. And these will be the clues that we are writing the right kind of poetry. Keep going!

Congrats to Ingrid on her accomplishment, and thanks from all of us at earthweal and global voices of Earth we represent. For this week’s challenge, let’s take up her call and write a poem of the Anthropocene which does not compromise.

It is indeed! Now tell us all about it!

The forum for this challenge will remain open until 4 PM EST Friday, when the next weekly open link weekend rolls out. Next week Sarah Connor takes us through the next cross-quarter Celtic holiday, the harvest festival of Lammas.

Postscript: Kerfe Roig created the art used on the cover of The Anthropocene Hymnal. She posts frequently to earthweal, and her art is a constant companion to her poems.  I asked her in an email about how she came up with the cover. “It was inspired by the work of Redon,” she wrote back. “I often reference the works of artists I admire in my work.  And the images–the cosmos, the land and the sea and the sky, birds and winged creatures, fish and shells, sculptural figures, ancient architecture–all are prominent in my reference library, and in both my writing and art. …  The world is magic, and the magic is real.  We need to acknowledge and honor that with the way we live.  Which means being good caretakers of the earth and the life it sustains.  But I think that’s what all this art and writing is about, isn’t it?”