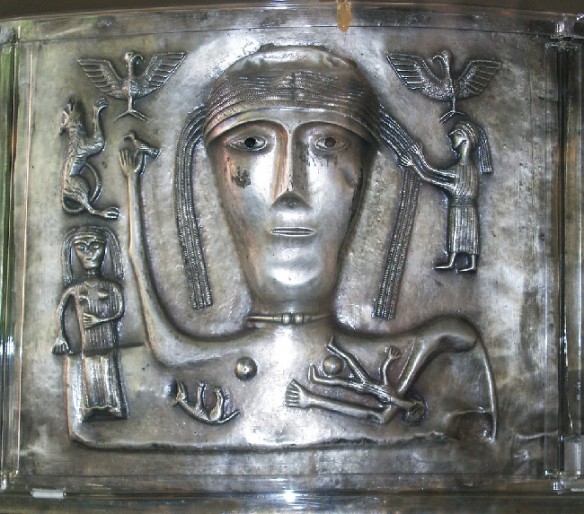 Perhaps the most universal aspect of manticism is the derivation of inspiration and the gift of poetry from the dead … But manticism is also widely associated with birth, and with rebirth.

Greetings all — as we all learned in Sarah Connor’s marvelous challenge last week, today is Samhain, the ancient Celtic festival of the dead. As she wrote so beautifully, Samhain is a festival of transformation:

The energy of Samhain is the energy of the dark. It’s the acceptance that death is necessary for renewal, that loss is necessary for gain. It’s the energy of change, of shedding old ideas, old ways of doing things. It’s the doorway to winter, to a time when the land lies fallow. Deep down in the dark, change is happening. Seeds are swelling preparing to put out tentative roots and shoots. Trees are dormant, waiting to burst into leaf. As creators, we all have fallow times. Samhain reminds us that these fallow times are a necessary part of creativity, that they need to be accepted. When we’re blocked, or empty, or wordless, maybe our inner creator is telling us it’s time to rest, to absorb, to let the deep work happen.

The Catholic church struggled for centuries to overwrite pagan practice, usually by Christianizing the old festivals — Saturnalia and Twelfth night became Christmas, the spring equinox turned into Easter, Beltane a month-long adoration of the Virgin Mary, the summer equinox St. Johns Day, the autumnal equinox sacred to Mananan become Michaelmas, sacred to the saint who rows souls to heaven.

For Samhain, Nov. 1 became All Saints Day, in recognition of all the saints and martyrs of the Christian past, followed by All Souls Day on Nov. 2 when all the dead still in Purgatory were prayed for. In Poland where Catholic tradition is still strong, souls of the departed are believed to come visiting; food is left on the table for them and the living go to bed early so as not to disturb their repast. The dead then attend a midnight mass conducted by a dead priest, and it is believed that a beloved soul might even be released from Purgatory should enough masses be attended by the bereaved on their behalf. In Portugal, soul-cakes are baked, in Austria and German godparents gift godchildren, and in most Christian countries it is a national holiday marked by graveside ceremonies, with offerings of candles, flowers and prayers and blessings of the departed.

In some countries like Mexico and Poland, All Saints Day is still vigorously celebrated; but as the Christian faith recedes elsewhere, concern for the dead has diminished too. There is far less worry about the eternal damnation of loved ones. (For most of us, life is Purgatory enough.) But death still scars the living, and grief still needs a ritual for healing.

Some countries like Denmark have begun non-religious celebrations called under names like “All Souls Day All Around” and featuring artistic interpretations. Their motto: “Rather than staying silent about the dead, let celebrate who they were and what they can convey.” Since burial practices have changed greatly – many are now cremated and their ashes thrown into sea or wood, or collectively composted — a central community grief-site was created, often extending into wooded areas or to shores. The area was then demarcated with light (in the form of paraffin lamps, candles or woodfires) and sound (drumming or piped in electronic music).

A variety of art installations ranging from sculpture to video art to performances then offered specific avenues for grief: a long clothesline holding white clothes with relationships written on the back (“sister,” “husband,” “friend” “pet”); a group of human-sized sculptures made of candle wax and with a candle burning in a hollow; a Chamber of the Afterworld with separate spaces titled “Chamber of Health In Which the Dew Drips,” “Chamber For Those Who Can Imitate the Singing of Birds” and “Chamber For Those Can Take Everything With A Pinch of Salt”; and so on. Participants say they could find their dead again, say things to them they hadn’t been able to before and experience a serene state that for them equated to a modern understanding of Heaven.

In folk tradition, Samhain means “summer’s end,” but the original etymology of Gaulish samonios means “assembly of the living and the dead.” The name appears on the Coligny Calendar as a six-day festival ushering in the dark half of the year. For three days before, the doors to the Otherworld were open and the living earth was haunted by the dead; if they were treated properly and offered a place at the table, things went well; shun or disrespect them, and all manner of chaos ensued. For Samahin and the two days after, assemblies were held with bonfires, dancing, sporting contests, oracles, feasting, coronations and further merriment—all in honor of the dead and the life to come.

Marking the beginning of darkness meant the beginning of life, a fertile chaos. Death is close where life begins. A witch ruled the birth-night before Samhain — our Halloween — a figure like the Morrigan or Calleach Bheare or sea-witch on Iona.  A giant Irish goddess named Cymidei Cymeinfoll mentioned in the Welsh Maginogion lives under a lake where the Cauldron of Regeneration receives the bodies of dead warriors; every six weeks she gives birth to a fully formed warrior. (A similar scene is shown on one of the panels of the Gundestrup Cauldron.)

As the COP26 climate summit now gets underway in Glasgow, the climate 8-ball we are behind is increasingly dire; the biggest carbon-polluters slow and slower in cutting emissions and raising needed funding. There aren’t many climate change saints to celebrate today. (The New York Times opinion section did a great animated piece on Greta Thurnberg’s exasperation with the powers who won’t act on the problem.) Regeneration is desperately needed.

Here at earthweal, we are a node of contact between poetry and the world. The festivals to come should not be limited to the only-human community. Assemblies are for the main, and all are invited, human, nonhuman, faunal, arboreal, lithic and stellar, living and dead. Imagine how bountiful such an assembly might be, for the living and all of its ghosts — ghost beast, ghost forest, ghost moon we once so loved to dance beneath.

Our modern world is too eager to be done with death. Technology creates ever-remote walls for the living so that death is rarely experienced or seen. Lives are prolonged, drugs help us ignore pain.  But what if the purpose of grief is not to heal our bereavement, but to help us accommodate the dead in our daily lives? As Tony Walter writes, “the purpose of grief is not to move on without those who have died, but to find a secure place for them?”

All Souls is about continuing bonds; deeper, Samhain is about ever-lasting relations with our ancestors: at earthweal we can connect the traditions.

I carry my dead: my mother and father are woven in my breast-bone and marrow the ancestral histories stretching far back of them, as are all the cats my wife and I have tended and then said farewell to. Conflicts, passions and yearnings of those whom I have loved and lost inhabit the back rooms of my working thought, reminding me of their work and the desire to carry it on. Simply put, I am who I am partly because of who they were. My attention to local intimacies is attenuated by the hearing of cats, the signaling of their tails and the infinite repose of their sleep. It’s no wonder that Siamese cats sit so erect on the tombs of Pharoahs and were mummified along with their dynastic servants.

There are many who find comfort and solace in Christian traditions of death and eternal life. But there many ways that people grieve, and singular paradigms don’t come close to  addressing the diverse needs and responses of the community. Who, what and how we grieve is not only a wide issue for humanity; non-humans grieve widely.

In the end, our grief helps us to accept death and our eventual entry into it. The deaths we have witnessed and grieved have become the tapestry of our history, and the fullness of it — our full hearts — contribute to the feeling that we have lived fully and can let it go when it is time. We join the ancestors and become part of the vibrant background.

Let’s invite the wide community of the lost — family members and their ancestors, Paleolithic kills and animals gone extinct, meteors which travelled from the remote universe to burn up in our atmosphere, sandy beaches composted of the shells of sea-life, ghostly coral savannahs, the life we consumed with last night’s dinner. Let’s see what an assembly we can summon, and by doing so, experience the incredible dimensions we share.

For this challenge, celebrate ALL SOULS.

Note to our cousins in the Southern Hemisphere: As you are now experiencing Beltane at the pole of the year opposite Samhain, add your songs of birth and flowering. Lend us a maypole to demonstrate how life dances with death.