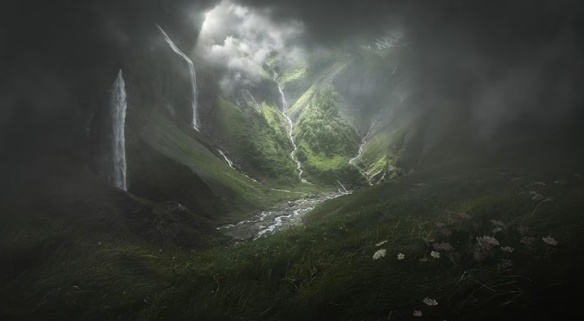 Half-wild, I hear a wolf,
half-tame, I bark. Then
in the dark I feel my master’s
hand, and lick, then bite.

I envy leaves, their touch: miles
by the million, tongues everywhere
saying yea, for the forest,
and in the night, for us.

At caves in the desert, close
to rocks, I wait. I live
by grace of shadows. In moonlight
I hear a room open behind me.

At the last when you come
I am a track in the dust.

There’s a saying in Alcoholics Anonymous about the need for recovering drunks to continue to grow spiritually: “I get filled with the spirit — but I leak.”

No matter how invigorated and refreshed I may feel about earthweal after a weekly challenge (and your contributions this past week were exceptional), eventually it’s time to break ground on something that will hopefully be as fruitful. What to write next. It’s the evergreen challenge of all writing endeavors, but poetry’s wilderness feels especially fraught. What is there deeper and more true to say—especially for a forum where grief and hope are not equal partners?

Global catastrophe presents an endless scroll of doom, redolent with the fevers of the day. In the week’s news:

Who can resist this doomfeed? Catastrophe is the literary crack of the day. Yet for all the obsessiveness of the feed, nothing much seems to be getting done. Armed with facts, we doze. The time is a moose in the headlights of an approaching semi. As critic at large Amanda Hess writes for the New York Times, we are awash in warnings that we are running out of time, and yet the climate crisis is outpacing our emotional capacity to respond:

Ours is a banal sort of apocalypse. Even as it is described as frightfully close, it is held at a cynical distance. That is not to say that the rhetoric signals a lack of concern about climate change. But global warming represents the collapse of such complex systems at such an extreme scale that it overrides our emotional capacity. This creates its own perverse flavor of climate denial: We acknowledge the science but do not truly accept it, at least not enough to urgently act. This paralysis itself is almost too horrible to contemplate. As global warming cooks the Earth, it melts our brains, fries our nerves and explodes the narratives that we like to tell about humankind — even the apocalyptic ones.

In contrast to disaster films where there is always a catastrophic conclusion, the climate feed keeps us “in an oxymoronic state, inhabiting an end that has already begun but may never actually end. Faced with this inexorable decline, the fire-and-brimstone fantasies grow ever more appealing. The apocalyptic drumbeat of social media gestures at the hopelessness of our situation while supplying a kind of narcotic comfort for it.”

Like others have pointed out, Adam McKay’s Don’t Look Up fails for Hess as a climate catastrophe allegory in one essential way, for it ends with a cataclysmic impact rather than centuries of steady overcooking. The problem with global warming is scale: it’s just too damn big and lasts too long for our human-sized descriptors. Give us the big bang so we can move on.

But we can’t, and instead languish in the scroll, marveling in the exotic foetids and fevers of its swamp. “In our response to global warming,” Hess writes, “we resemble the frog who does not hop from the heating water until it’s too late. Except we are aware that the water is boiling; we just can’t imagine leaving our tumultuous little pot.” To keep repeating Thomas Friedman, everyone wants to go to heaven but no one wants to die.

In the end, the scroll may prove to be most useless artifact of our self-destruction as Hess concludes.

The internet is often criticized for feeding us useless information, and for spreading disinformation, but it can enable a destructive relationship with serious information, too. If you’re a person who accepts the science, how much more do you really need to hear? The casual doomsaying of social media is so seductive: It helps us signal that we care about big problems even as we chase distractions, and it gives us a silly little tone for voicing our despair.

Most of all, it displaces us in time. We are always mentally skipping between a nostalgic landscape, where we have plenty of energy to waste on the internet, and an apocalyptic one, where it’s too late to do anything. It’s the center, where we live, that we can’t bear to envision. After all, denial is the first stage of grief.

Which brings us back to the quote from the AA oldtimer who caused so many heads to commence nodding when he said it. I fill up on wildness but it’s like appetite, eventually I thirst and hunger again. Wildness is a resource that cries for renewal. Yet the center where it’s found — inside as much as the wilderness without — is a battered boreal forest we romanticize too much while stumbling around in its fumes.

I hardly need go far into the mental wasteland of misinformation, conspiracy theories, and virtual surreality that daily sinks us into deeper into the mire of nowhere. If anyone doubts this is a race to the bottom, the United States this past week just passed the 900,000 mortality mark for COVID-19, largely due to vaccine misinformation. And  the U.S. Republican party censured two of its own members for participating in the Jan. 6 congressional committee looking into presidential malfeasance and the riot attempting to overthrow the election results., declaring that the mob who swarmed the U.S Capital were instead participating in “legitimate political discourse.” How far is this from rumors of a Russian deepfake video creating the illusion that Ukraine had attacked. Russia and offering pretext for Russian invasion?

Of course, the prize always gets back in US hands, where far-right conspiracy theorists recently launched a campaign against a Texas butterfly center because they were convinced it was being used as a cover for child sex trafficking. The center was forced to close. ““When I took this job, I thought I would be able to spend a good amount of time outdoors: butterflies, birds, educating children, writing grants,” said Marianna Trevino Wright, the center’s executive director since 2012. “Now every day my children literally worry whether I’m going to survive a day at work.”

Ta daaa! Thinking about this stuff takes one quickly into the maelstrom.

in his book The Shallows: What the Internet is Doing To Our Brains, Nicholas Carr writes that our brains themselves have been disrupted by digital media, our neural wiring re-routed, so that we now think fleetingly, distractedly, widely but without depth, without concentration or meditation. “What the Net seems to be doing is chipping away my capacity for concentration and contemplation,” he writes. “Whether I’m online or not, my mind now expects to take in information the way the Net distributes it: in a swiftly moving stream of particles. Once I was a scuba diver in the sea of words. Now I zip along the surface like a guy on a jet ski.” Published more than a decade ago, The Shallows aptly describes a mentality we have become hardwired into; online dependency is as fundamental as fossil-fuel culture.

Our distracted and desensitized minds may be as much as result of too many online carbons floating about in our brains as the oppression of our worsening climate. I’m becoming increasingly convinced that our virtual existence is a big part of the problem. It may not be possible to be wild and online at the same time; they are minds of a different order, the one free and ungovernable, the other a silo of self-seeming things.

As Dogen Zenji puts it in The Etiquette of Freedom, “the way the self arrays itself is the form of the entire world. Whoever told people that ‘mind’ means thoughts, opinions, ideas, and concepts? Mind means trees, fence posts, tiles and grasses.” (p 17)

Wildness is mind truest to its nature. As Snyder writes in The Practice of the Wild, “to be truly free one must take on the basic conditions as they are — painful, impermanent, open, imperfect — and then be grateful for impermanence and the freedom it grants us. For in a fixed universe there would be no freedom.”

Turn off the feed of worsening dread. Grieve with hope and be free!

For this week’s challenge, write of WILD MIND. How does green fire take root in the thought of our poems?

For Captain was the Butterfly
Helmsmen was the Bee
And an entire universe
For the delighted crew.

We are all burning in time, but each is consumed
at his own speed. Each is the product
of his spirit’s refraction, of the inflection
of that mind. It is the pace of our living
that makes the world available. Regardless of
the body’s lion-wrath or forest waiting, despite
the mind’s splendid appetite or the sad power
in our soul’s separation from God and women,
it is always our gait of being that decides
how much is seen, what the mystery of us knows,
and what the heart will smell of the landscape
as the Mexican train continues at a dog-trot each
day going north. The grand Italian churches are
covered with detail which is visible at the pace
people walk by. The great modern buildings are
blank because there is no time to see from the car.
A thousand years ago when they built the gardens
of Kyoto, the stones were set in the streams askew.
Whoever went quickly would fall in. When we slow,
the garden can choose what we notice. Can change
our heart. On a wall of a toilet in Rock Springs
years ago there was a dispenser that sold tubes of
cream to numb a man’s genitals. Called Linger.