Click on the Mr. Linky link which follows to add your link. Add your location after your name in the link so we know where on Earth you post from.

Be sure to visit your fellow poets and comment. Discussion as what on Earth your fellows are writing about is a renewable source; treat it as such.

Links will be accepted through Sunday night, followed by a Monday challenge focused on some aspect of our changing Earth and lasting til Friday.

The next weekly challenge will be SOLASTALGIA (Homesick in a Changed World).

Your fruitful and communal conversation is also welcome in the comments section. 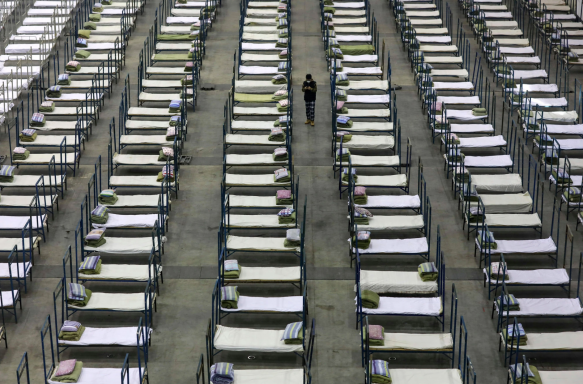 A convention center in Wuhan, China, converted into a temporory hospital, Feb. 6, 2020.

Yesterday the weather in Florida turned changeful—unseasonably warm for February (hitting a high of 87) and the wind picking up with surprising force. A big front strolled across the US Midwest, muscular and foreboding with winter snow, hail and tornadoes; as it made its way toward the Southeast of which Florida is a part, fulsome Gulf heat and moisture pumped up the southern tail of the front into a nasty line of storms. They mowed over our house last night around midnight in a fury of wind and lightning and thunder and rain. Fortunately there were no twisters as the whipping tails of these fronts can produce, like the pack of twisters on Groundhoug Day 2007 which raked Central Florida, lifting mobile homes skyward and killing 23, or the one which concentrated just on this town in 1993, damaging some 2,000 trees, many of them stately old oaks planted when this town was founded a century ago.

Six hours after the front roared through—as I now work on this post—the winds are still battering the neighborhood, weaving and whipping and roaring in the trees. These sorts of events aren’t all that unusual in Florida, but there is an added edge, a louder volume, a greater velocity to it.

They say everything is big in Texas, but in the 21st century ACE, climate change is making everything everywhere bigger.

And fast. Many areas around the world are dealing with cascading impacts of climate change. Take Australia, where areas ravaged by monster wildfires are rolling out further effects with fish kills from ash runoff and floods from torrential rains. Traditional and modern practices of fire control are seeming less likely to help with high and higher heat, burning on such scale and fire seasons extended further through the year.

Scientists now observe that climate change is causing the oceans to speed up. Winds are blowing harder, speeding surface ocean currents. One noticeable effect in the Pacific Ocean is the creation of hot spots which have been devastating to ocean life. These ocean changes were surprising to the scientists, they hadn’t expected to see such results for another 50 years. It’s similar to the acceleration of other predictions of earth impacts from climate change.

The big heat and fires are coming sooner, glaciers are melting faster, hurricane seasons are ramping bigger and faster every year (last year’s Hurricane Dorian would have been declared a Category 6 storm had such a category existed. The other day Antarctica recorded its warmest temperature on record—64 degrees F. The poles are melting at a record pace.

Is it weird to you that events on a geologic scale are irrupting so quickly into our already-speeding human time? Watching a glacier melt away in time-lapse is a dislocating experience. But observing dozens of events unfolding on a global scale in daily human time is somewhat like watching the seven days at the Creation in a biblical flip-book.

Speed used to be a novel human invention (think of those speed racing trials in the Bonneville Salt Flats), but now the world is outpacing us. This is especially worrying in the spread of novel coronavirus, which started with an infected snake or a bat on sale in an outdoor wild game market in Wuhan, China, leapt onto a peddler and fanned out from there. Even with the most stringent state controls, in a month we’re anxiously calculating the chances of global pandemic.

The carrier?  A fleet-footed humanity who travels at will and can sail or fly anywhere in the world.

And we thought the Australian bushfire horror was big enough … Nothing is big which can’t be overwhelmed by something else in the Anthropocene. 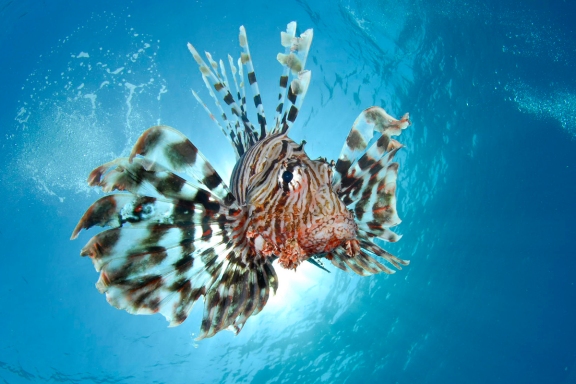 Introduced by human travel and trade, invasive species threaten ecosystems all over the world, Hogs were brought to South Florida in 1539 by the Spanish explorer DeSoto. Over time they roamed, went feral, and now root through agricultural areas like rototillers, causing some $800 million in agricultural damage every year. Lionfish are beautiful additions to the tropical aquarium, but somehow they got into the Atlantic Ocean around 1985 (flushed down a toilet, probably) and have become voracious reapers of Florida reef ecologies. Burmese Pythons make strange pets (but then, consider their keeper); escaped or abandoned ones made it into the Florida Everglades where they have flourished, resulting in mammoth declines of small mammals like raccoons and white-tailed deer. Florida newspapers routinely publish photos of state-appointed hunters holding up trophy pythons approaching 17 feet long, but what goes unreported is how the Everglades ecosystem is changing under the rule of this new apex predator—more turtles, apparently (raccoons who favored their eggs are gone), and different plants growing because there are fewer mammals to dispense seeds through their feces. Who knows.

Truly though, humanity is most invasive species of all, covering the globe like kudzu and shaping  it for purely human use. We’ve hunted megafauna to extinction, overfished the ocean, polluted the skies with fossil fuel exhaust, ruined landscapes with chemical farming and covered the rest with asphalt. Even near space is getting to be a mess with drifting pieces of debris from our 50 years of space exploration.

In 200 years we’ve managed to set the global clock back 50 millions years. That’s a strange accomplishment, engineering a way into geologic time, re-shaping our Earth so much that our near- and long-term climate future is now in our hands. Will our fate be that of hothouse Venus? Some of that depends on how hard and fast humanity tips the balance in the decades to come. For now—for us, here—we have a chance to emotionally and aesthetically calibrate that speed from our various lives and locales, that heart and art may perceive what may be too fast for human eyes.

In my morning reading I’ve been re-reading Wendell Berry’s collected poems as well as foraging in a very different volume, Reginald Dwayne Betts’ Felon. Berry has so much to say about damage and renewal—deep, abiding stuff. Betts has something equally important to say about damage and renewal. Reginald, who is African-American, served time in prison many years ago for a robbery he committed while still a teen. After his release he went to Yale to study law, became a public defender and kept writing poems.

Slavery was an invasive thought introduced to the New World with a vengeance, and as many as 60 million Africans died during their indentured labor. Four hundred years later its poisoned rootstock still finds ways to darken the American mind, in shadowy ways we hardly can acknowledge. As Michelle Alexander wrote her 2010 book The New Jim Crow, mass incarceration of black men using draconian drug laws passed in the 1980s has kept generations of black America in jail. Civil rights may have been granted in ’60s, but the shackles are still there.

Betts is deeply aware of how both his crime and the gulag of punishment he was thrown into has shaped his identity—the appellation of “felon” affects and afflicts every good thing to follow—and his message here, I think, is that renewal is neither easy or sure, and the product which survives may be unlike any poetry we have before known:

Sometimes you need a dark astringent to see clearly. This, from Betts’ “Essay on Re-Entry” from the collection:

…Nothing can be denied. Not the gun
that delivered you to that place where
you witnessed the images that won’t
let you go. Catfish learning to subtract,
his eyes a heroin-slurred mess;
Blue-Black doing backflips in state boots,
the D.C. kid that killed his cellmate.

Jesus. Barely older than you, he
had on one of the white undershirts
made by other men in prison, boxers, socks
that slouched, shackles gripping his shins.
Damn near naked. Life waiting.

Outside your cell, you could see them wheel
the dead man down the way. The pistol

you pressed against a stranger’s temple
gave you that early morning & now,
boxes checked have become your North Star,
fillip, catalyst to despair. Death
by prison stretch. Tell me. What name for
this thing that haunts, this thing we become.

I don’t know why this pairs so well with a favorite Wendell Berry poem of mine, but it does:

TO KNOW THE DARK

To go in the dark with a light is to know the light.
To know the dark, go dark. Go without sight,
and find that the dark, too, blooms and sings
and is travelled by dark feet and dark wings.

from Farming: A Hand Book

Maybe we have to grow different eyes to see what’s really going on these days. This thing that haunts, this thing we become. A novel coronavirus, a hot Antarctic, roaring winds outside my window today—: It all comes at us fast. Better write something down before tomorrow.

Hard winds still blowing outside the window. When it gets light I need to collect the tarp which blew off the garage roof and pick up debris. We didn’t have to fire up the generator I bought last summer for the increasing likelihood of occasions like this, which is good. But the year is early.